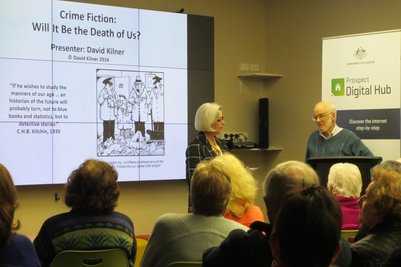 I will be talking about crime fiction and my books at the following events. All events are held in South Australia, usually in Adelaide or nearby.

About My Talk:
"In this light-hearted, well-illustrated and interactive talk, David Kilner will discuss crime fiction in its many forms from its origins 250 years ago through the years to contemporary fiction. Along the way he'll look at the impact of film and television on crime writing and ask what does reading or watching crime fiction actually do for us?  Finally he'll talk about his own books - how they came to be written, some of the challenges of writing and why he chose his characters. Book signings available at the end."

Be warned! I ask the audience lots of questions...

Some Feedback
'All attending made it sure to us how much they had enjoyed your presentation,and we would like to again express our thanks for such an interesting evening.' (Pat Matthews, Public Relations Officer, Friends of Holdfast Bay Library, 20 April 2016)

'Recently I heard David Kilner give a brilliant chronological power point presentation on the history of  250 years of published crime writing illustrated by the appropriate book covers. This was followed by categorising  the books into genre, e.g. psychological thrillers and many more. He also spoke of the research into his own crime books The Climate Change Murders and The Rock Art Murders with Skyla Merrick  as the main character in these exciting mystery stories. I came away with a much greater knowledge of Crime writing and an appreciation of the amount of research undertaken to have produced such a fine informed presentation.' (Jenny Hills, Chairperson, Friends of Walkerville Library 20 October 2016)

'Thank you David for yesterday's  talk ..it was so interesting and well presented ..we will call on you again sometime.' (Judith Atherton, Chairperson, Noarlunga U3A, 9 June 2017)

'Thanks again for your excellent talk on Friday. It was both informative and entertaining. There were a number of appreciative comments while we were clearing up after the meeting.' (Allan Fox, President, Marino Men's Probus Club, 13 October 2017)

'A most interesting and professional presentation [which] gave us greater knowledge of crime writing'. (Yankalilla Men's Probus Club)

'David, thank you for the most interesting talk on Crime Fiction yesterday, I had members' coming to me later saying how much they had enjoyed it.Wishing you all the best for the future.' (Cathy Stauner, Flagstaff Hill Ladies Probus Club)