DEATH IN THE CRYPT

I am hoping to make it available as a free download for a limited time.

Death in the Crypt is the third in my Skyla Merrick mystery series.


A shock for Skyla as the book opens:
Danny DeLuca’s voice boomed through the car. ‘Your sistuh has been arrested for murder, Skyla.’
I slammed on the brakes, skewed the wheel towards the emergency lane and skidded to a halt.
Tom grabbed the dashboard and shouted, ‘Jesus, Skyla.’


A body in the crypt… but who killed Nellie Yurebilla?

Everybody has their own gameplan but no one’s saying what it is... one wants to kill; one gets killed; one wants to rescue another; one would rather not be there; and everybody’s after the money.

Senior Detective Sergeant Skyla Merrick is out to save her sister from a murder charge but the cops don’t want her interfering.

Skyla’s sister’s girlfriend’s boyfriend wants to hire Skyla’s private eye partner to find out the truth. But to rescue her sister Skyla will have to put everybody’s lives on the line... including her own.

Family history was never meant to be like this…DEATH IN THE CRYPT!! 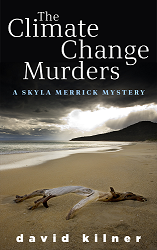 Somebody wanted Edwina Ling dead and it would not be a pleasant death, that was for sure.

But who was the villain? The climate change activist? The professional colleague? The fishing industry guru? The ex-lover? The disgruntled employee?

Detective Sergeant Skyla Merrick must tackle not only confusing evidence trails and public brawls but also long-buried personal traumas that threaten her objectivity. The only one she can turn to for help is the man who betrayed her ….

Comments on The Climate Change Murders:

"Oooops! Think I've already awarded my best book title for 2015
so this one will have to go in the honourable mentions basket."
Submitted by Glen Donaldson on Thu, 09/04/2015.
http://www.austcrimewriters.com/books/climate-change-murders%20by%20david-kilner

The Missing Scene
An earlier version of the novel had an opening scene which I subsequently deleted.
The missing scene contains clues - or are they red herrings? Click here to read the scene.

THE ROCK ART MURDERS
The Rock Art Murders is my second Skyla Merrick novel, published in 2016.

Skyla Merrick is always in some kind of trouble …
On light duties – investigating the theft of Aboriginal rock art – following a near-death experience,
DS Skyla Merrick is challenged when ordered to investigate a series of grotesque murders and weird clues.
So who is the guilty party?
*The entrepreneur bent on expanding his windfarm?
* The mining engineer seeking a new prospect?
* A group of nature conservationists?
* Or the local Aboriginal community protecting a sacred site?

Here's the opening:
The first murder shook me. I hadn’t come looking for murder, I was on another trail entirely, not that I’d told anyone. So when Fergus Lennox phoned and said, ‘Come see what we’ve found, Skyla,’ I was like ‘What? A murder? You’re kidding me, Fergus.’

Snowball
Snowball is a short story.

Skyla investigates the strange case of a man found murdered with his arm boiled in cooking oil. She has a suspect but why is he so keen to confess?

Big Brothered is another short story but unlike Snowball, this one is intended to be humorous.

Skyla finds herself embroiled in a farce involving her boyfriend, a dodgy politician and the politician’s wife, all of whom have secrets they’d rather not have revealed. Then the spirits of George Orwell and Big Brother upset the delicate applecart.